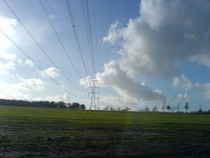 Obviously the follow-up to part I, not so obviously, nothing at all to do with songs or singing. For this is the sound of – presumably – one man and his synths – and guitars – and electronic percussives. There are 6 tracks - “each designed to reflect a different mood” according to the composer – which, basically translated, means either a masterful use of arranging so that they have a flow that runs like blood through their veins, or that they are so loosely connected, you'd wonder how they could remotely figure on the same album. Luckily, we have the former....

“Signals” opens things with a track where a myriad synths provide all manner of layers from melodies, through phased fx, through space swoops to deep bass undercurrents, all of it propelled by a electronic, sequencer and electro-percussive rhythms and beats that are more in the ;90's than the '70's, more downtempo than techno, more synth than trance – but lovingly crafted so that the dynamics of the rhythms are very carefully calculated not to become repetitive. Meanwhile the synths fly, soar and swoosh, while what sounds almost like a Frippertronic guitar figure wanders in its lonely space as the synths well up and expand, then soar into the skies to be replaced by even more layers and textures as they travel, all the time the melodies and rhythms flowing along neatly, the whole thing possessing so much depth, you're actually riveted to the piece, the moreso, the more you play it and fimd what's going on below the beats. “Return To Earth”, however, is nothing less than an absolute killer of a track – using a fuzzed-up electric guitar, what sounds like a real drum kit, a massive attack of synths and deep rumbling bass, the guy has produced a track that manages to mix Neu, Mark Shreeve and Joe Satriani in one magnificent melting pot and the effect is awesome – a track that's so addictive, it's worth the price of the CD on its own, and one you'll just want to play and play and play – one of the best instrumentals of its kind I've heard in a long while. After this, “Time Slip Palindrome” sensibly starts on a more spacey vibe, weird otherworldly sounds opening up before a synth melody blips into life, choppy drums provide the solid rhythmic foundations as a slowly unfolding river of beats, gentle layered guitars and distant synth provide the meat of the track, this time the lead guitar more delicate and melodic, at times almost dangerously melodic, sounding a bit too “sweet” for the ride. But the stuttering synths and other textures take up the reigns from the beats, so much so that you almost are unaware that the guitar figure has changed shape until that, too disappears, and then the whole track stops – sounds strange, but works a treat. “Half Light” is altogether more cosmic but still rhythmic, in other words, slowly moving melodies that are stretched out to infinity backed by delicately choppy electro-percussive rhythms that are unobtrusive but play a vital part in the track's successful movements through space. The synths and guitar, along with a deep undulating bass, expand and spread their wings to fly slowly onwards above the addictive chilled-out rhythms as the ambience of it all proves positively hypnotic, with a warm glow as it travels. “The Lost Voice Of Reason” is initially based around a series of repeating loops in a kind of ambient electronic Fripp & Eno territory, but just as you're wondering how much longer they'll go on, the composer gets it spot on by taking them down in the mix and replacing them with a slowly evolving series of synth fx, swirling melody patterns and solid electro-percussive downtempo beats. Above this, a lead guitar, this time more melodic, glowing rather than red hot, soars gracefully above the choppy rhythms and synths swirls and fx, full of depth and texture but deceptively simplistic sounding, yet a complete success for its simplicity. The album ends with “Go Green” which starts very bizarrely before a churning fuzz guitar lead enters, drums crunch in, a huge Magma-like bass makes its presence felt and distant synths swoop in the background as the guitar lead is joined by a bouncing synth melody and the somewhat unusual combination of grungy guitar and lightweight synth lead sound oddly intertwined until the guitar is relegated more to the background to allow the synth lead – and assorted partners – to take the reigns over the ever increasing intensity and electro-percussive variety of the rhythms. Eventually a much stronger lead guitar takes over from the synths and for the rest of the track, the effect is wondrous as the guitar-led composition takes off in a hail of melodies and layers and moves onwards and upwards to the end of the track. All in all, it's a really excellent album – one track blows my sox off, the rest are all really enjoyable and it's an album that I know I'll be playing a great deal – once I'm in the right mood – or moods.

This is an album of pleasant surprises. 100% electronic and a mixture of
ambient, trance and space styles, it is also minimalist in structure and
yet remarkably complex in the way it utilises shifting cycles of rhythms
and melodies to keep the music interesting. The album contains three
long tracks - Fifth Blob From The Sun, Sea Of Tranquility and Red Spot -
and all are linked by a set of common loops that mutate between the
tracks. With each track being so long you have the ability to fall into
the timelessness of the sound, becoming lost in what could be described
as a different dimension to our own. In a sense this is music for sci-fi
fans. The sleevenotes in the dvd box are suitably enigmatic so I have no
idea how many musicians [or how few] make up The Jupiter 8. This
anonymity rather works in the favour of the music, giving it an air of
mystery and the feeling of being beamed in from somewhere else in the
galaxy. It’s spacey, maan! And I, for one, am looking forward to hearing