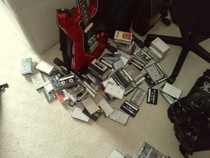 This is my second full length album, which is an evolution from Songs from the Engine Room (Part I). It's my attempt to capture the joys and sorrows of life in the 21st century through the eyes of 'The Jupiter 8' who are returning to earth after 7 years. This is quite a varied album sonically, which builds on the musical themes in Part I and then throws them wide open!

1. Fifth Blob from the Sun

This is my first album which features three long hypnotic tracks, which takes us on a futile mission to land on Jupiter's surface thinking that it is solid.

This is s a 1 track CD single limited to 8 copies, some of which I gave away with the first album as a goodwill gesture when I was late with the packaging. Its an upbeat number with a fun feel to it conjuring up a carefree moment with friends and family in a park somewhere (on a Sunday!).

A one off release to celebrate 08/08/08, follow this link for more details:

The Jupiter 8 - On Compilations

This is a slow, almost dubby track with a kind of seething but quietly determined atmosphere. This is the last track on the A-Frame Media complilation 'Framework' which features some really good stuff from 'The Glimmer Room', 'Louis Gordon', 'Sickmoth', 'Ion', and many more!

This is a perky little number inspired by my love of early electro - 1982 is the year that Planet Rock by Afrika Bambaataa was released. A lot of the early electro tracks had an atmosphere which was slightly melancholy and optimistic at the same time and I tried to feel this and put it into this track.

These are edited remixed versions of two tracks from Songs from the Engine Room (Part I). They stand up nicely on their own and are quite handy when going on a short walk and you don't have the time to listen to the full length versions.

The Jupiter 8 - Contribution to other projects

Everyday I die for your body - Tommorow's Tuesday - The Glimmer Room

I contributed guitar parts to this track which is the first track on the first Glimmer Room album. Andy C took my guitar bits, mashed them around a bit and produced this wonderful track which has become one of the highlights of the Glimmer Room live set. This version features a really dirty wah setting from an old zoom 3030 multi-fx which I really must dig out the loft someday.

Stages Echoed 2005 (Live at the Awakenings) - The Glimmer Room

This was our (Me and Andy C) first live excursion as 'The Glimmer Room' with me on guitar/bass/laptop/loops/sequences. I got the chance to build on what Andy C had done with his studio tracks and take them to new places, with some element of improvisation. The live version of 'Every day I die for your body' is particularly good, especially the end bit with the swooping planes and Andy's off the cuff pads!

Stages Echoed 2008 (Live at the Awakenings) - The Glimmer Room

This was another live excursion which saw us adding more improvisations between songs and really playing around with the Glimmer Room studio tracks, again with me on guitar/bass/laptop/loops/sequencers. The whole set is pretty solid, but I have to single out 'Don't tempt me' as a really killer track as it stands out on a limb from previous material and I got to embellish it with some fretless bass which I really enjoyed playing. This would have been available to awakenings gig goers as a virtual ticket, but other than that, there is no official release at the moment. There is a couple of video's of the set on You-Tube.

Added some bass to the bottom end of this wonderful track which is perfect end to a perfect album!

After enjoying playing live together as the Glimmer Room, Andy C and I decided to make this an ongoing concern with a new set of music based on improvised and loose musical structures. We decided to let the music grow organically out of experimentation and just jamming with a few bottles of Golden Champion inside us. The results were quite psychedelic and cinematic conjuring up atmospheres of enigmatic places that are far away from the cities of the world. This was originally released as a virtual ticket for the gig, and we are seriously thinking about releasing this as a CD at some point in the future.

This is the first Parallel Sun album, officially released on 1/3/2013. This is five tracks of densely layered prog electronica. We're really pleased with this as nicely glues our individual styles together and creates some new that we would not have done on our own - a true collaboration.

All CDs/Downloads are available from the A-Frame Media Shop http://www.a-framemedia.co.uk/catalogue.htm